The use of toxic pesticides is a global threat to human health and the environment. Pesticides pollute the food we eat, the water we drink, and the air we breathe. It is a major driving factor in the unprecedented collapse of insect populations and biodiversity loss. Each year, 385 million farmers and farmworkers suffer from acute pesticide poisoning.

Small-scale farmers, food producers, agricultural workers and food sovereignty activists are working to change the way we produce our food so that it doesn’t harm people, living beings and the planet. These efforts are now under threat. In October 2020 FAO and CropLife International announced a formal partnership. CropLife actually called this a “strategic alliance.”

Why is this a #ToxicAlliance?

A formal alliance between FAO and CropLife International would tie the FAO with manufacturers of harmful pesticides and unsustainable agrichemical technologies.

CropLife members are the largest agrichemical companies in the world: BASF, Bayer Crop Science, Corteva Agriscience, FMC and Syngenta. They make more than one-third of their sales income from Highly Hazardous Pesticides — the pesticides that are most harmful to human health and the environment. Their primary aim is to maximize sales of their products, regardless of health and environmental harms. 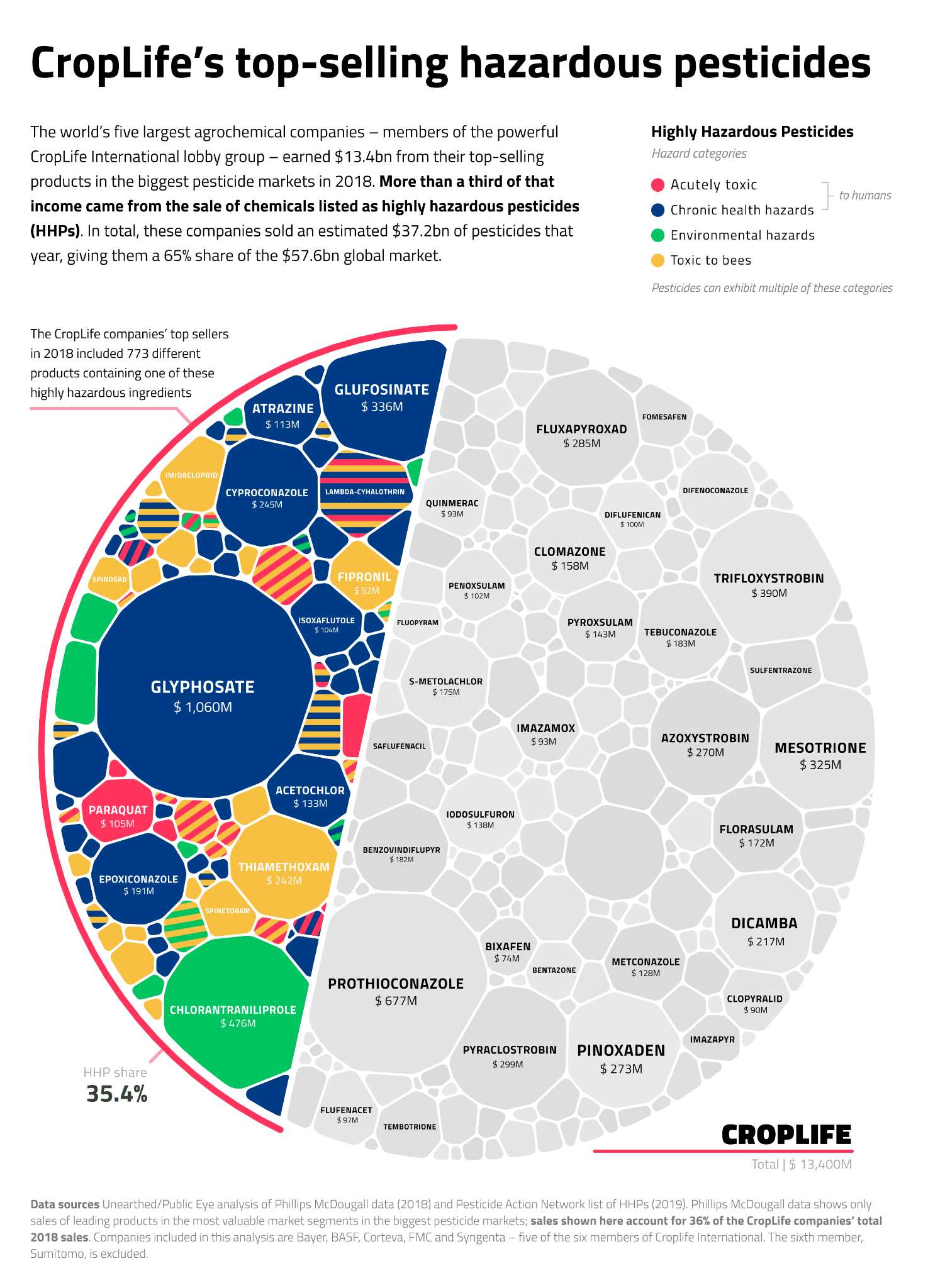 CropLife asserts that it aims to provide “environmentally friendly” technology through the genetically modified (GM) seeds that its member corporations produce. A large proportion of these seeds, however, are engineered to be used in conjunction with proprietary chemical herbicides. These GM seeds are thus a mechanism to boost associated chemical sales.

These antiquated chemical solutions run directly counter to the urgently needed transition to innovative, knowledge-intensive ecological approaches known as agroecology that FAO has been supporting in recent years.

A partnership between FAO and CropLife would give additional space for these pesticide and GM seed manufacturers to more aggressively promote such harmful and deadly technologies in order to increase their profits and control global food systems.

We cannot allow FAO, the UN agency charged with reducing hunger and supporting farmers and rural communities around the world, to formally align with an industry that is devastating people and the planet.

FAO must promote policies to increase farmer access to practices and tools that help them grow their crops sustainably without harming their health -- not partner with the poison cartel! 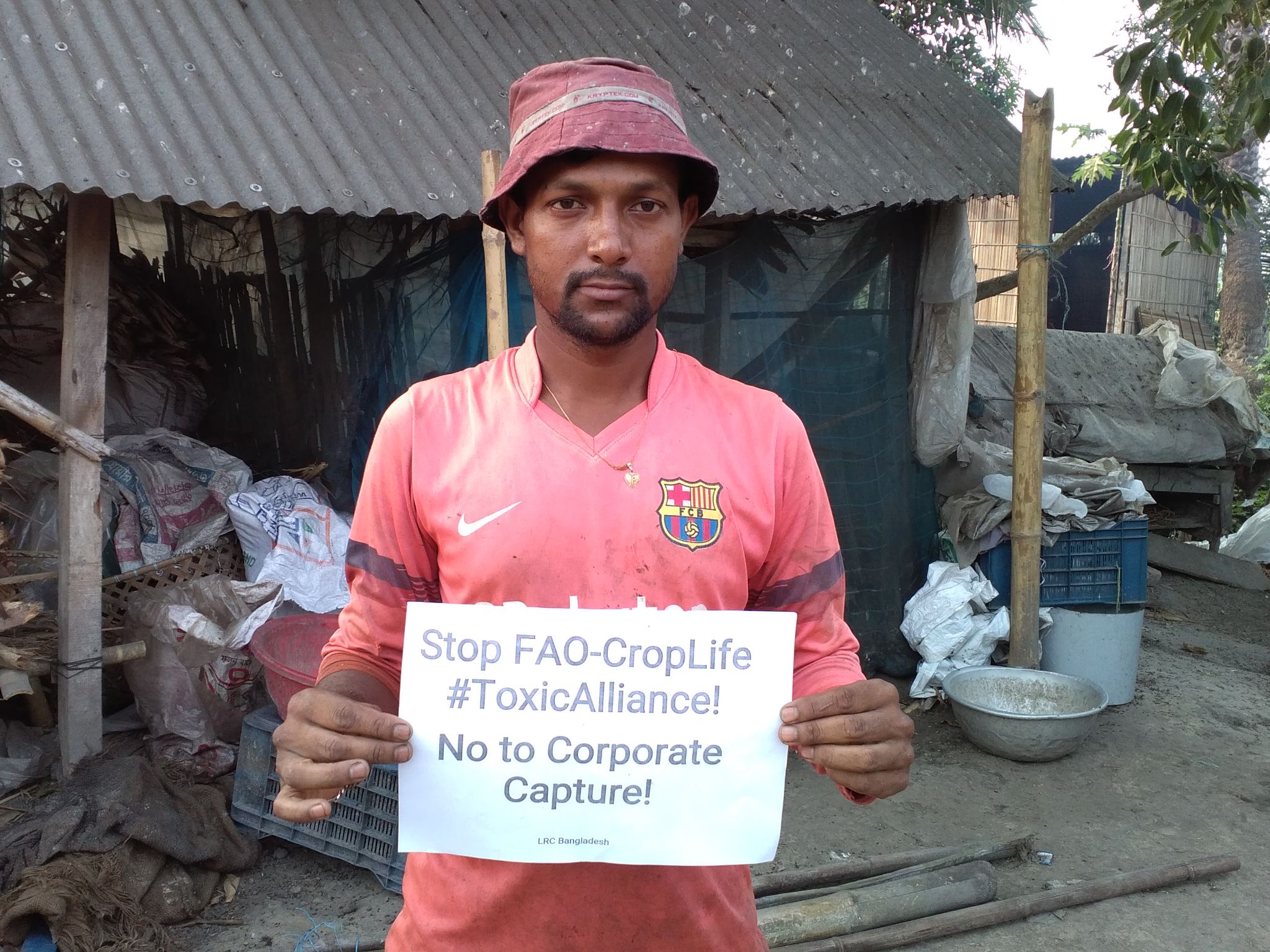 Our strategy is to mobilize significant global public pressure to stop the formal alliance between FAO and CLI.

Background: In November 2020, more than 350 civil society and Indigenous Peoples organizations from 63 countries, representing hundreds of thousands of farmers, fisherfolk, agricultural workers and other communities, sent a letter to FAO Director-General Qu Dongyu expressing our concerns. That same day, more than 250 scientists and researchers did the same. Director-General Qu wrote back, but did not address our concerns and instead signified that the partnership was pushing through. Soon after, a group of 47 foundations and funder networks delivered their letter of concern, and have received no response from the FAO.

PAN requested to meet with Director-General Qu twice in December, with no response. In February, PANAP and PANNA began co-coordinating this global campaign, bringing together representatives of 11 global organizations and networks to strategize on our goals and tactics.

in March 2021, these 11 global organizations and networks again wrote to Qu and requested a formal meeting. FAO Director-General Qu has not responded to our request to meet.

Nonetheless, we continue to mobilize the public to exert pressure on FAO to maintain its commitment to promote a just, resilient food system through agroecology.

What can you do?

Share the message! Help spread the word about the #ToxicAlliance and why it should be stopped.

Use the hashtag #ToxicAlliance for social media postings, and tag the @FAO and @FAODG to make sure that our voices get heard!

We are collecting individual signatories from around the world to call on the FAO to stop its #ToxicAlliance with CropLife. Sign on and get others to do the same! We will submit the petition to the FAO at the most opportune time later this year--let’s make sure that they know we won’t allow this partnership to push through!

Join future actions! Follow us on social media @pesticideaction and @PANAsiaPacific to get updates and announcements of future actions. If you or your organization is interested in more strategies to pressure the FAO, email us at simone@panna.org and info@panap.net. To see our previous actions and activities, click here.

We have seen how the pesticide industry exerts an enormous amount of pressure and influence on governments that move to protect the people and environment from pesticide harms. It played a key role in Thailand’s decision to overturn an earlier ban on the cancer-causing glyphosate.

Right now, CropLife is actively involved in lobbying US officials to pressure Mexico to overturn a similar ban on glyphosate, which is the industry’s best-selling herbicide. 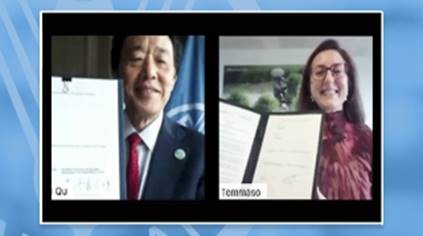 The FAO-CropLife #ToxicAlliance facilitates pesticide industry influence in our global food system, and exemplifies the deeper problem of corporate capture in national and global governance. It was forged within the context of the UN’s 2019 Strategic Partnership with the World Economic Forum (WEF). This UN partnership with representatives of the global economic elite all points to a direction of governance that perpetuates and even further consolidates corporate control over food and agriculture. And we see happening in the development of the UN Food Systems Summit scheduled for fall of 2021, in which agribusiness interests have taken hold in setting the agenda and framing of the Summit.

Stopping a formal partnership between FAO and CropLife will be a significant victory in the broader global movement against corporate capture. To safeguard the health and well-being of people and the planet, the pesticide industry must not be allowed to hold sway at FAO.